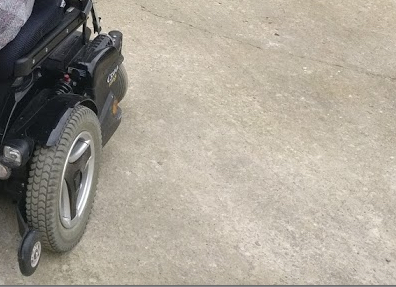 I’ve just had an incredible weekend socialising with people who all have Brittle Bones like me. We spent 3 days in a hotel laughing and joking. Mainly just hanging out without the worry of being asked how fast our chairs go or getting called ‘trouble’. It was great and we all had a little too much fun as usual. My head ache and lack of sleep told me that on Sunday morning. I didn’t care though because I’ve had such a good weekend.

I’m still full of fuzziness from the trip as I head back home. Looking forward to chilling in the sun and recuperating. I wave at the taxi rank and head in the car from the ramp at the back, get clamped in and relax. The taxi driver asks where I’ve been as he clamps me in, I’m so tired that I don’t go into the whole brittle bone get together because hashtag effort so I loosely say I’d been away with a big group of friends who have the same disability as me. As we are set to go he asks “can you walk then? Or crawl or…?”

I let there be an awkward silence. I then said ‘pardon’ just to give myself time to let it sink in that a man I do not know is asking whether I can walk or crawl (!?). Usually I take a breath and politely give the answer. Not today. Today the remaining prosecco from the night before is swirling around in my stomach and brain – I have no time for this. He repeats the question, not even hesitating. I reply saying “That’s a very personal question, you shouldn’t ask things like that”
He replies abruptly saying “I’m just being friendly”

I was baffled. For a split second I actually felt bad. Was he being friendly? After all everyone makes small talk in taxis…

Definition of Friendly from Cambridge dictionary: ‘behaving in a pleasant, kind way towards someone’

And then I was annoyed that someone who was inappropriate made me feel like I was the one out of line. Then there’s of course the whole being stuck in a car clamped down on the hottest day of the year so far whilst being interrogated on whether you can crawl or not – I’ve got to admit it’s not the comfiest taxi ride home. What shocked me more is there was no apology after my reply, no sign of listening to what I was saying. It made the journey home feel a little strained I have to say.

Anyway the moral of this story is that intentions are a strange concept, and something I’m constantly challenging myself on as well as others. Sometimes we all say things without realising the consequences or how the person you’re talking to will feel from your words. I think what matters more is how we deal with the challenge, and not to dismiss it but to really take it in. Even if it makes your skin crawl and you’re absolutely chuffin mortified. Because no matter what you thought when saying the words, if a person explains why it’s not ok to say – don’t tell them what you meant to say. Just take it in and learn from it. I guarantee you won’t make that mistake again, which ultimately helps us all out.

Being Young and Disabled | 24 things I’ve Learned so far… »